PrimeArray monster BDXL disc, opening the way for manufacturers to start introducing the technology in their optical drives. Not too much here that we don't already know: aimed at institutions and folks who need to archive lots and lots of... stuff, BDXL discs are available in either triple layer 100GB (re-writable or write-once) or 128GB quad layer write-once flavors. Of course, with all these layers the laser in the Blu-ray drive you already own won't be able to do the trick, so start saving your change for a hardware upgrade once these things become commercially available.

BDXL, the new multi-layer recordable Blu-ray Disc format with up to 128GB of capacity. With the completion and approval of the specification, manufacturers can now obtain licensing information and license applications needed to begin production of the high capacity write-once and rewritable discs and hardware.

The BDXL specification was developed with specific market segments in mind, and newly-designed hardware addressing such markets will play back or record BDXL media. However, because the new media specifications are extensions of current Blu-ray Disc technologies, future BDXL capable recorders can easily be designed to play back existing 25GB and 50GB Blu-ray Disc formats. 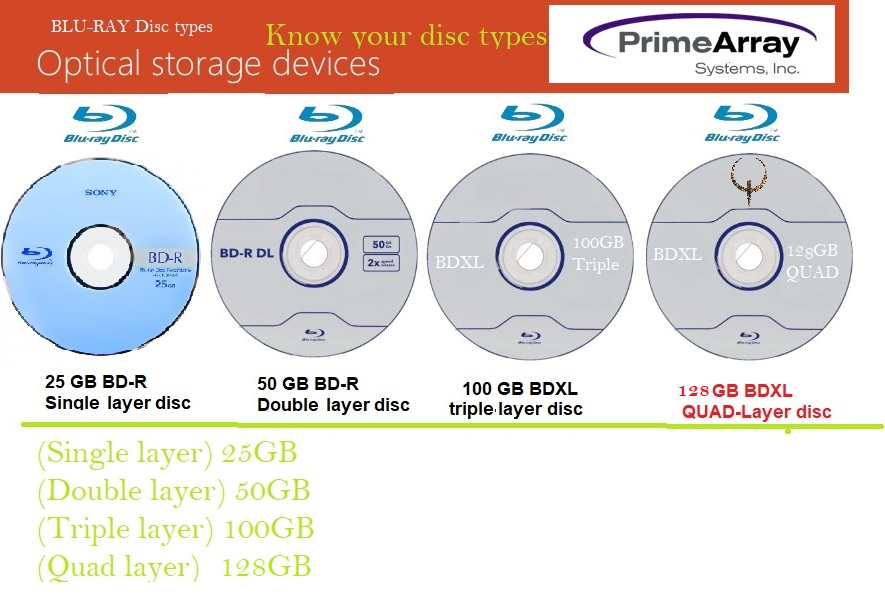 Save time with the ultra fast write speed

Get the speed burning edge you've been looking for with 16X BD-R writing that shaves time off the burning process compared to its predecessors. It's about 8'30'' writing time with 25GB BD-R SL Disc.

Three Layer BDXL-R/BDXL RE discs offer 100GB capacity while quad layer BDXL-R discs boast 128GB storage capacity. You can now write up to 128GBs of data on a quad layer BDXL™disc which is the equivalent of 27 standard DVDs or 5 single layer Blu-ray discs.

The MDISC uses a patented rock-like recording surface instead of organic dye to etch your records. The MDISC offers superior reliability in data storage compared to other recordable DVDs on the market today.

Play in peace with less noise

As a disc is being read, Silent Play technology helps reduce the noise during playback by automatically adjusting the playback speed.

Jamless Play prevents the video playback stopping due to a damaged disc. Damage such as scratches and fingerprints are ignored by jumping through the erroneous data or damaged areas.

Take entertainment to the next level with 3D using the new Power BD-DVD 3D Software bundle. You can now enjoy the excitement of your 3D Blu-ray titles on your PC and with 2D to 3D converting feature you can bring a new dimension to all your 2D titles.

Capture all the excitement of Blu-ray with the 12x BD-ROM reader that offers smooth blu-ray playback. Plus, burn more DVDs in less time with 16x DVD-Max writing speed.

Enjoy freedom in use, compatible for both Windows series and MAC OS.

PrimeArray is selling the 128 GB write-once BD-R XL optical media. The discs will also be the first quad-layer BDXL media formally aimed at consumers, but bringing benefits to professionals that use BDXL today.