As video quality grows PrimeArray storage systems have your back, allowing for easy storage of massive pixels 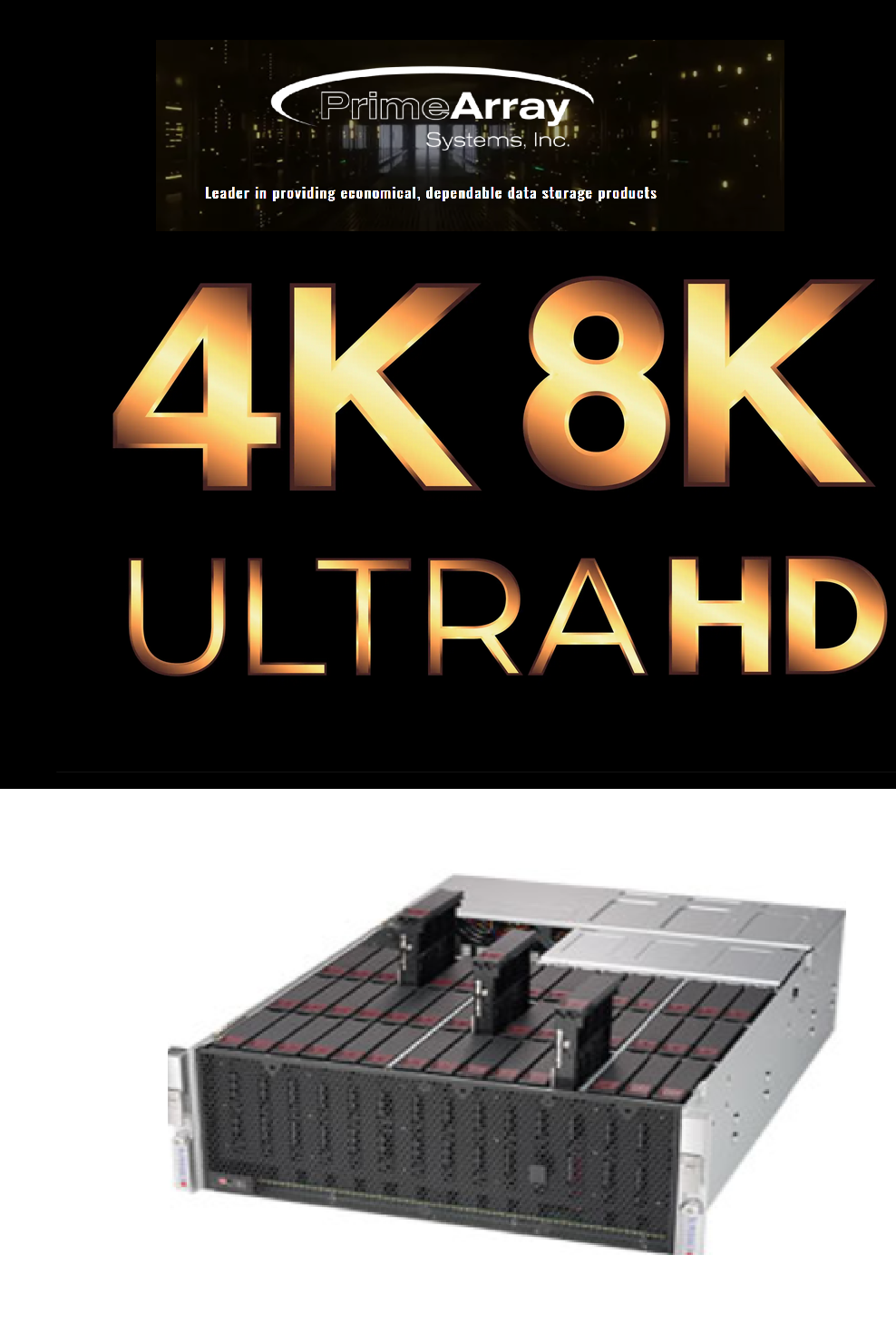 The resolution is high enough to produce a very detailed image, but it’s also high enough to look very sharp even when you’re looking at it up close. You can clearly make out the details, lines, and colors in 8K video, but you might want to sit a bit distance from the screen to fully appreciate the detail.

8K can use several types of cable/connectivity for transfer:

Hollywood’s Huge (And growing!) Storage Demands –
Blockbuster movies are exciting to watch but behind the scenes they create huge storage requirements for producers. This PrimeArray will take a close look at key factors affecting the storage needs of the media and entertainment industry and discuss how LTO technology can help. Quiet on the set – Action!
Hard drives, SSDs and other media
PrimeArray is using hyper-converged systems with petabyte hard drives and solid-state or NVMe caching, it's now possible to store video on what would traditionally be considered primary storage.
PrimeArray Performance Storage Solution— Dedicated On-Premises Storage Servers
The one top-tier solution for the storage problems that come your way in the video production industry is the on-premises dedicated storage servers. These servers can be of many types, such as NAS, SAN, or DAS. These storage solutions can either be connected to servers or workstations to improve the remote workflows. Here are some of the storage solutions:
PrimeArray Direct Attached Storage (DAS)
These directly attached storage discs— as clear from the name— can be connected locally to the servers and workstations. These DAS discs have grown and progressed through various technologies such as SATA, PATA, SCSI, SAS, etc.
Storage Area Network (SAN)
Storage Area Network (SAN) can offer data storage solutions that works best for remote teams, especially when you have different departments or teams such as the editing team, proofing team, and delivery team; SAN can take up multiple networks in one drive in storage area network. This performing storage can be divided further to be utilized on different storage servers. The SAN has two types, as mentioned below:
iSCSI
The iSCSI storage networking can provide up to 1GB/s to 10 GB/s and utilize the SCSI commands. This is the first protocol that uses the end-to-end SCSI commands over the IP, and these protocols can be utilized with any storage server.
Fiber Channel
The Fibre Channel (FC) can manage to provide a speed of up to 20 GB/s and utilizes dedicated hardware such as a Host Bus Adaptor (HBA) which an ordinary hard disk drive cannot provide. Also, the cables utilized for connecting the server components are the special fiber channel cables.
Network Attached Storage NAS
If you want a single shared storage node, the server NAS has got you covered! The network storage server will have multiple disk options appearing as a single node in the RAID array. The NAS storage cannot be seen as the disk drive in a PC but as a network location. The NAS storage protocols include the CIFS, NFS, GFS, and AFS, allowing the users to have access to multiple files simultaneously in a single location. Thus, this NAS server storage system can be a good addition to your storage server setup for remote teams.